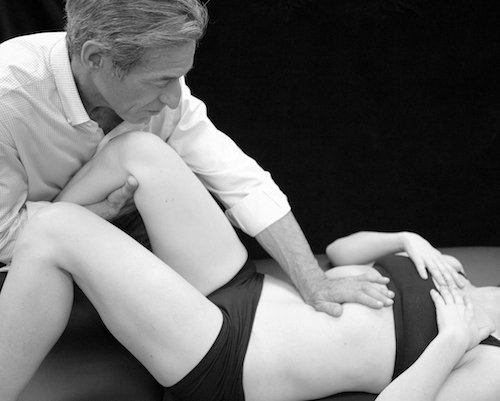 I fell in love with Rolfing in 1971 while attending New College in Sarasota, Florida, a school of only 325 students. At the time, Ida Rolf lived nearby in Siesta Keys. The teachers who assisted Ida often offered demonstrations and sessions. Having experienced a myriad of bodywork with some skepticism, I decided to wait until many of the other students had experienced it before giving it a try. But then, as if by magic, I watched the campus blossom with this work. It seemed as if a forest had come alive when no one was looking.
When I arrived back in Los Angeles for Spring Break, I received my first three sessions. For me, it was transformational. I had never felt so in touch with my body and with my movement. Simply walking, sitting, and breathing were a completely new experience.

Throughout the next years in college, I would save funds to receive sessions and read and studied as much as I could about Rolfing. When the time came to make a decision as to what to pursue in graduate studies, I found myself choosing between between Rolfing and dentistry. I enrolled in Boston University School of Graduate Dentistry because it felt like the safer path. I chose that institution because the first semesters took place at the medical school and I was able to obtain an extraordinary foundation of training in the basic sciences. I studied anatomy for four hours a day (two hours of clinical lecture, two hours of dissection), five days a week for nine months.

During my third year of dental school, it became clear to me that my real love was for Rolfing. When I told the school that I was leaving to become a Rolfer, they (perhaps rightly so) thought I was crazy; in turn, they offered me a federal grant to do dental research at the VA hospital in Togus, Maine, thinking that this might get me to reconsider. I took them up on their offer.

Even though I fell in love with Maine, I stayed true to my dream and entered the Rolf Institute in January of 1982. I began in Boulder, Colorado and completed my degree in France as part of the first European class.
From the moment of my graduation, I had the opportunity to study with some of the great teachers and practitioners of Rolfing as well as a multitude of other disciplines. Whether it was via phone, email, or traveling in a plane or car, I kept in contact with great minds in the field and built my own base of knowledge and experience. I had the wonderful and rare gift of learning from some of the pioneers in bodywork. I often had opportunities to work side-by-side with them, teach with them, and later teach for them. Some of my mentors included John Upledger, D.O., Jean-Pierre Barral, D.O., Emily Conrad, Hugh Milne, D.O. and numerous others to whom I will always be grateful for their generosity, kindness, and willingness to pass along their knowledge and expertise.

Over the next several years, I completed and received my Ph.D. degree in the field of Health Sciences. As I continued in my practice, I, too, began to teach. My teaching focused on the fields of Craniosacral therapy, pediatrics, spinal mobilization, and visceral manipulation, along with courses on brain anatomy and function. These courses were taught throughout the United States, in Switzerland, Germany, Austria, Iceland, and Denmark. You will find descriptions of these classes on my website.

One emphasis in my practice that is close to my heart is the evaluation and treatment of infants. I feel that this is the best form of preventative care. To paraphrase Dr. William Sutherland, the pioneer of cranial osteopathy, “As the twig is bent, so grows the tree.” My work with infants is child-centered and based on trust, safety and respect.

It is of particular importance to normalize the structure before a dysfunction becomes a template for possible structural, behavioral, sensory, learning, and developmental issues later in life. I was recently honored to write the forewords to the books Craniosacral Therapy for Children by Daniel Augustoni (2013) and Accessing the Healing Power of the Vagus Nerve by Stanely Rosenberg (2017).

My searching has also led to the creation of four books that I wrote with my best friend, Richard Carlson, who had written the Don’t Sweat the Small Stuff series. We wanted to explore questions we had in regards to both healing and spirituality. Healers on Healing, For the Love of God (the name later changed to Handbook for the Spirit), Handbook for the Soul, and Handbook for the Heart have all been translated into many languages and together have sold nearly a half million copies.

Over the years, I have had the opportunity to share my thoughts in various articles, radio programs, and television features, including a half-hour program devoted to my practice on the Discovery Channel.
In my practice, I continue to seek refined solutions to physical problems. It is my quest to help individuals get out of pain, stay out of pain, and have the most ease and comfort in their bodies. The purpose of each session is to achieve the greatest amount of choice possible in structure, function, movement and emotion.

I practice in Los Angeles, the city that I was born and raised. I am happily married and live with with my wife, Lisa, and Owen, our Bernese Mountain Dog, and Milo, our Shar Pei.